“The idea to see the capitols was given to me by someone else, but once I got going I was hooked. I started with Lincoln, in a way, but could not get in that day. Or maybe I just didn’t try. I saw, from the outside, the ones in Des Moines and Indianapolis too. I first entered one in Charleston. Then I decided that I had to see them from the inside for them to count.

On that first vacation to the capitols I saw Charleston, Trenton, Richmond, Columbia and Oklahoma City.

Many years later …eleven, I believe, I saw my last capitol, Harrisburg. Started with West Virginia, ended with Pennsylvania. Neighbors!

It’s been great fun! I have learned tons in doing the capitols and in creating this passport to them. If you really want to know my favorite, I will tell you. Just ask!”

I recently completed by quest to visit all 50 state capitolsand what a great feeling!! My interest in this quest began as an offshoot of my professional lifewhich includes a good deal of time spent in my very own beautiful state capitol in Dovercapitol of Delaware, the First State (to ratify the constitution) . This inspired me to strike out and include capitols of other states in my travel plans. The adventure has taken about five years to complete, and has been a great deal of fun. Along the way, I met so many interesting folks who share this interest. The final capitol I needed to complete my quest was Juneau, and I made it there on a very special day: the first day of the legislative session. The staff there (Sergeant at Arms and tour guides) could not have been more gracious. It was very exciting to be on site as the peoples business was being conducted. This structure, the former territorial administration building, does not have the appearance of a traditional state capitolbut is a beautiful example of Art Deco federal architecture. It is a functional and very attractive structure, and the natural scenery of Juneau is breathtaking, to say the least. My capitol adventures have often been tied to another work-related or other trip. One of the last stops I made was revisiting the Oregon state capitol in Salem while on a business trip to Portland. I dragged along a colleague with mewho was a real sport in climbing all the way up to the top to the observation area at the base of the Pioneer statue. We both were treated to a stunning view of the lush green landscape that is typical of western Oregon. I had visited the capitol previously, but did not have the time then to fully tour the building or climb to the top of the domeso now I can count this as a complete capitol visit!! Another interesting note along the way: I actually made two visits to the Idaho state capitol in Boise. On my first visit, the capitol was undergoing the recently completed extensive historic restoration and overhaul. I made a point to return this past January to see the recently unveiled capitol. The restoration is stunning, and the capitol is a real showpiece. I look forward to revisiting capitols as my travelsboth professional and persontake me around our beautiful nation.

I can never pick just one favorite when listing the state capitols, but I can select a standout group.

If someone were to visit one or just a few of the Capitols, the best area to focus on would be in the Midwest. Driving through Madison, Springfield, Jefferson City, Topeka, Lincoln, Des Moines, and St. Paul highlights some of the most spectacular buildings in our nation.

Madison, WI. was such a large building it encompassed the entire city. The large white rotunda could be seen from anywhere in town, and I was really impressed with the waterfronts of the lakes.

The Missouri capitol was memorable to me because of its interior architecture, especially the staircases and murals depicting the states history.

Nebraskas really surprised me; there was so much going on, and from the outside it just looked like it would be a skyscraper filled with offices. Iowas has a Victorian feeling, making one seem as if he/she has fallen back into that era, and Kansas could make a case for the same.

Californias has a certain Spanish art uniqueness to it, Vermont has a lovely forest backdrop to it (especially in the autumn when I went), and Pennsylvania, Arkansas and Texas are memorable due to their size.

The building in Boston had one of the better tours. It seems like it had the most common tourists (not school groups) visiting, and I like to be in large groups of people.

But, many of the smaller cities had great individual tours, with knowledgeable guides.

–Scott Mammoser finished visiting all fifty State Capitols on May 9, 2007
in Richmond, Virginia, after five years.

As we retired in 2005 and had a desire to tour the USA in depth in order to learn about is advent, history and political system we decided to acquire a motorhome and spend as much time to do just that.

In 2007, we visited the National Parks that we had not have the time to do in 2006. We acquired a great understanding of the geography, the large populated areas and some a the major significant historical events that line up its history. As coincidence, 2008 is a Presidential Election year, Quebec City celebrate its 400th anniversary.

Beside, we had not dedicated as much time to learning about the U.S. history. We felt that all the conditions were favorable to spend the whole of 2008 going across the country by visiting each and every Capital City and plan the project to leave Montreal on November the 12th in order to complete the trip before Election Day on November 4th 2008.

We started in New Jersey (Trenton) and were offered the Capitol Passport which we bought immediately. We were not aware of this program and it proves to be very interesting. As its stands now, we have completed our 19th Capitol visit (Oklahoma City). We have a website www.agsna.com which we update every week. I suggest that you look at it to see our itinerary and photo album.

The site is in French but we intend to incorporate some English topics as of the 25th week. The Passport is well known and in most location we get to have it stamped with the State Seal. We have also a few signatures (lieutenant governor, senator and representative). The personnel in each and every location has been wonderful and very welcoming. We have been recognized by one House of Representatives and have the opportunity to meet so many interesting people. Of course, our trip is limited to the 48 contiguous continental states. Each and every State House has its uniqueness and we find it very interesting to discover them all. We are very happy about our decision to undertake this challenging project.

John C., in traveling to the capitols, does photo montages of his visits.  We have been showing them in the newsletter, but thought they needed better exposure.  So here they are.  Thanks, John! 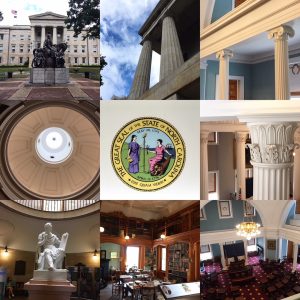 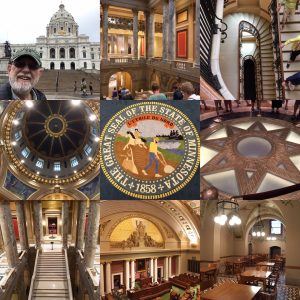 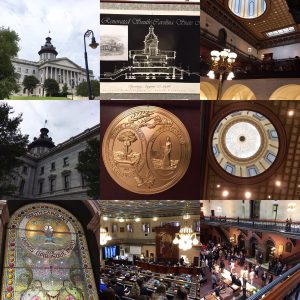 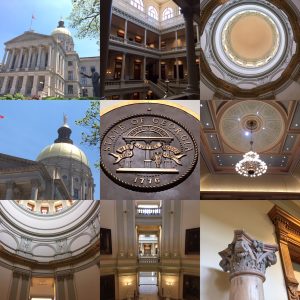 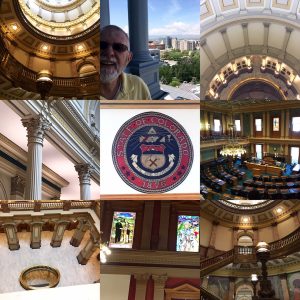 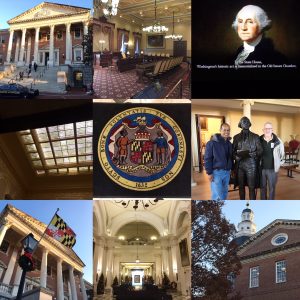 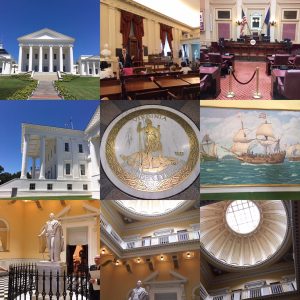 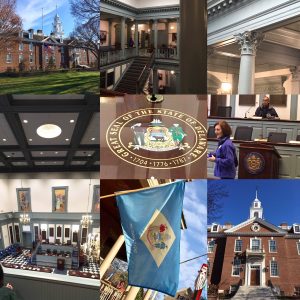 How to use the stamp

If the stamp IS there but you don't know how to use it, please see Operating the Capitol Collection Stamp here on our website.

Read comments from those who have seen them all! Have you been to all the capitols? Write us an e-mail and tell us about it and we might include your travel tales here!

You can purchase your passport book online using a credit card or PayPal or you can do it the old-fashioned way by
printing out the order form and mailing it to us.

If you buy the book but have already visited many capitols, there is no need to despair! Just contact us with the date you visited the capitol(s), and make sure that you include your mailing address. We will produce replacement stamps for your book and send them to your home, free of charge! You may send us a letter, call us, or use email; whatever works for you, just send us your list and you will be good to go!